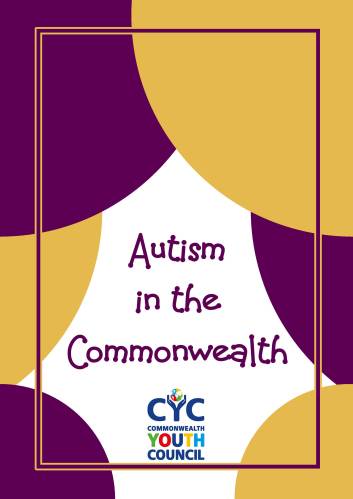 There is an old quote that ‘If you’ve met one person with autism, you’ve met one person with autism.’ Everyone will be different, and this diversity across the spectrum is something people need to be aware of. The Commonwealth Youth Council interviewed Jonathan Andrews, a young advocate for the inclusion of persons with autism in the workplace in the United Kingdom and now extended his work to the Commonwealth with a new toolkit, “Autism in the Commonwealth” that seeks to dispell myths about autism.  This toolkit is the first publication in a series of “I am ABLE” campaign.

J.A.: As you mention, I was responsible for writing, editing, and sourcing this incredibly important document on autism across the Commonwealth. I think it’s vital that all countries understand autism – and more precisely, autistic people – because it’s not just a national issue, but a global issue too. People on the autism spectrum exist in every nation, Commonwealth and non-Commonwealth, and any action to ensure quality of life is high for people and they are able to live and work on an equal playing field as everyone else, with both needs and talents taken into account, will be far more effective if countries collaborate.

And the Commonwealth itself is very committed to disability issues – the Queen Elizabeth Diamond Jubilee Trust works to help those who are blind, while several Queen’s Young Leaders and Fellows of the Royal Commonwealth Society are working in this area. Therefore, the Commonwealth is the perfect organisation through which to share information and best practice on autism.

CYC: How do you think the Commonwealth, through the Youth Council, can serve young people with autism?

J.A.: Well, firstly, the youth council already serves young people with autism in the sense that they have the same concerns all young people have; the youth council provides a platform for their interests to be heard and for collaboration between youth from varying Commonwealth countries with interests in common. Specifically looking at autism, communication by the youth council around autism, particularly around young people themselves speaking openly, will help to tackle stigma and general lack of understanding – which is higher in some countries than others but exists everywhere.

And especially those with autism who also have learning disabilities, effective legislation is key to ensuring the countries’ social care sector supports their needs and allows them to utilise their talents – the similar common law legal systems across Commonwealth countries provides an opportunity for countries to learn from others about what laws work best and to easily replicate these in their own jurisdiction.

CYC: Jonathan, you are from the United Kingdom where there is a lot of support for persons with autism (from diagnosis to work experience programmes) and most countries in the Commonwealth are just getting a diagnostics centre and capacity and we are all part of this Commonwealth family – how do we tap into the UK experience?

J.A.: Countries shouldn’t feel like they have to do everything at once, but I do think there’s a lot of the UK experience which countries could be replicated. They could start by educating their population, and especially their psychiatrists who will be diagnosing children and adults, about the condition, so they don’t have a stereotypical view of autism. At the same time, countries can look into provision for those with more severe, or obvious, autism and ensure this treats people as individuals and that while needs are met and people are safeguarded, they are still able to live fulfilling lives. Once autism awareness is increased, countries can then look to improving life chances for those with “high-functioning” autism at school and work.

However, I don’t think a copy and paste approach from the UK would be wise in all circumstances. Lots of the employment initiatives in the UK, for example, have been led by large companies with thousands of employees, who can afford to allocate money to specific internship schemes. This is unlikely to work as a model in small states, but the principle that companies should make their recruitment processes suitable or they’ll miss out on talent definitely holds true.

CYC: What advice would you give Commonwealth youth about engaging persons with autism in their country?

J.A.: Don’t come with preconceived notions of how people will behave or what they’ll want; everyone on the autism spectrum is different, often incredibly so. Listen to individuals – not an individual, because they won’t represent everyone, but individuals – to understand their concerns, and try to involve them as much as possible in actually tackling the issues, or creating the opportunities, they mention. This way you can be sure that the work you’re carrying out is actually improving things.

If you would like to contribute to the #IamABLE campaign and especially with autism, here is the “AUTISM2 in the Commonwealth” toolkit.

Jonathan’s final advice: Anyone can make a difference to autism acceptance, even simply by passing on this toolkit to a community that wouldn’t normally access it, so don’t feel you can’t help because you’re not an expert – every little helps!

View all posts by angiepops11

One thought on “Launch of Autism in the Commonwealth Toolkit”